After 13 years, victims of Shell’s oil pollution in the Niger Delta have finally achieved justice in court, in a historic case brought by Friends of the Earth Netherlands. 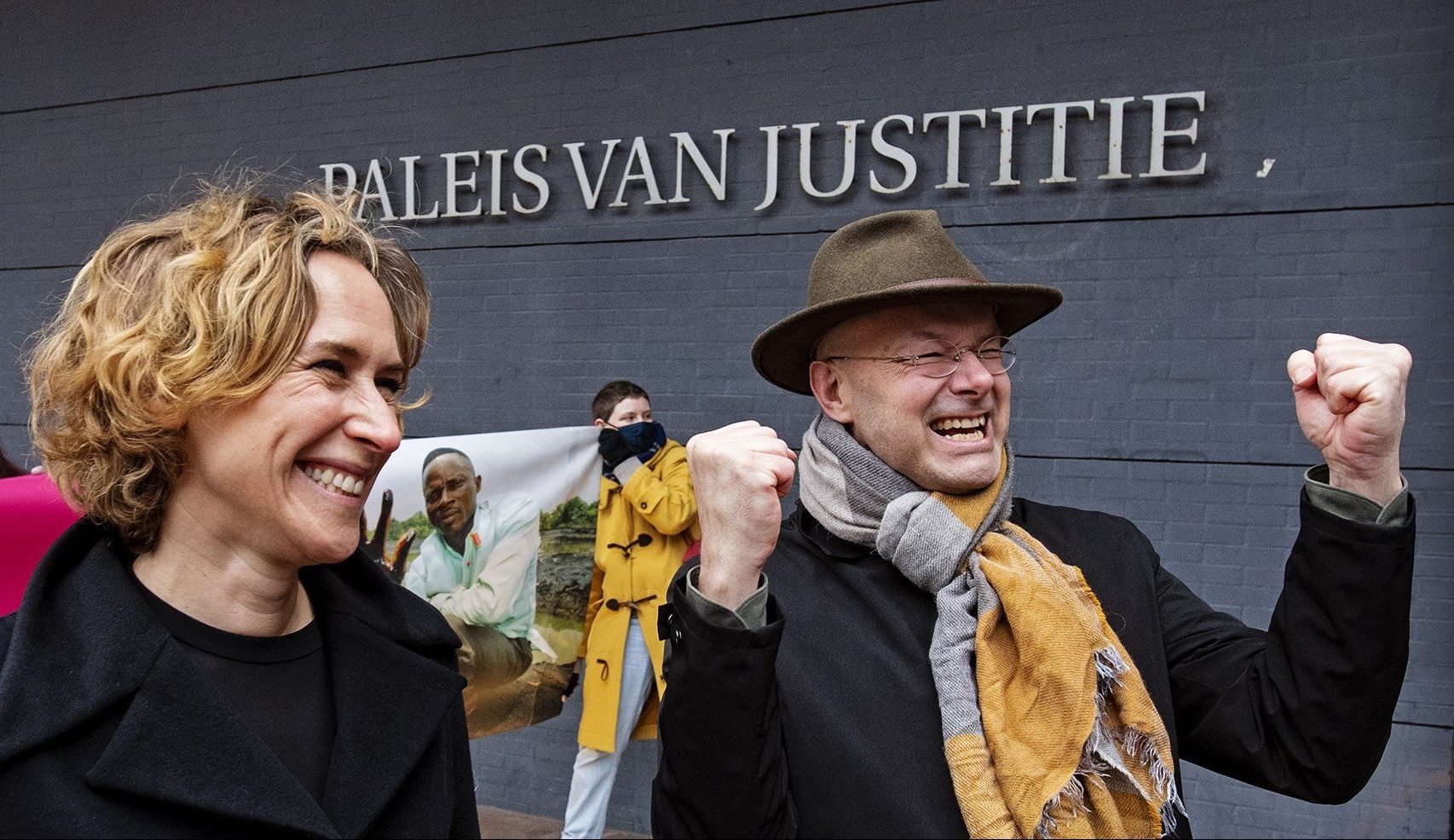 The director of Milieudefensie and chair of Friends of the Earth Europe, Donald Pols, celebrates outside the Court. © Brontsema / Milieudefensie.

It took 13 years. Finally, some justice for the people of the oil-soaked Niger Delta. Three Nigerian farmers, victims of oil pollution – supported by Milieudefensie/Friends of the Earth Netherlands – beat one of the world’s most powerful transnational corporations, Shell, in court in the Hague.

As the news spread across the world, people across Nigeria celebrated with victory parties.

“Finally there is hope, some justice for the Nigerian people suffering the consequences of Shell’s oil,” said Eric Dooh, one of the plaintiffs.

Dooh’s home, Goi, was a lush, fertile, thriving village. Until two major oil spills from Shell’s poorly maintained pipeline struck in 2003 and 2004, contaminating land and water. People were left destitute, but Shell denied any responsibility. So, Friends of the Earth joined with Dooh and three other farmers from nearby villages to sue Shell in its home country, the Netherlands.

It took years of gathering evidence and jumping legal hurdles. Finally, the court found that both Shell and its Nigerian subsidiary did not do all that was necessary to prevent and respond to the spill. It is the first time any survivors of Shell’s pollution have won compensation and justice in the home country of the oil giant.

This case has paved the way to justice for victims of corporate crimes. The evidence shows Shell has much more cleaning up to do in Nigeria. But from now on, any Dutch company failing to adhere to human rights and environmental regulations overseas risks being taken to court, held accountable, and forced to pay compensation. Now Friends of the Earth is campaigning for stronger laws to make this avenue easier to access.

An end to EU backing for new gas projects 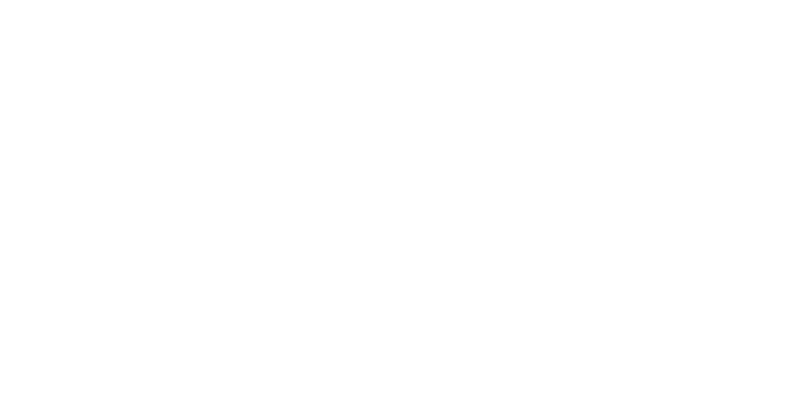 For years, Friends of the Earth Europe has been calling out the parade of new fossil fuel infrastructure the EU gives its backing to, and campaigning to end this source of cash for new gas pipelines and terminals that contribute to the climate crisis.

Now, after intensive advocacy in 2020, the EU is set to end backing for new fossil gas pipelines. This European Commission has removed support for new oil and fossil gas projects in its revisions to the ‘TEN-E’ law governing energy infrastructure – a move Friends of the Earth Europe gave a cautious welcome to. Nevertheless, the campaign continues to remove the influence of vested gas interests in the law and to end support to hydrogen from fossil fuels. 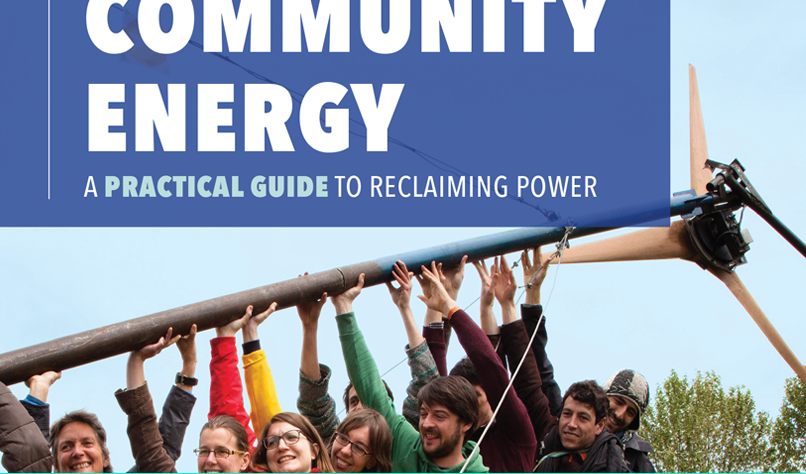 We know that community renewable energy has the power to both speed-up the transformation of our energy system, and make it popular – with benefits felt by people locally.

In 2020 we wanted to build on our success in winning support for community energy in EU law. So, we launched a programme to equip communities with the tools they need to lead the energy transformation.

A community energy organising course online trained 20 organisers from across Europe – they’re now busy establishing energy communities in their localities. And our new handbook, published to an enthusiastic reception, is guiding people to initiate and grow their own successful community renewable energy projects. The book is full of instructions, practical tips, powerful success stories and invaluable resources to build a local, community-led renewable energy revolution. 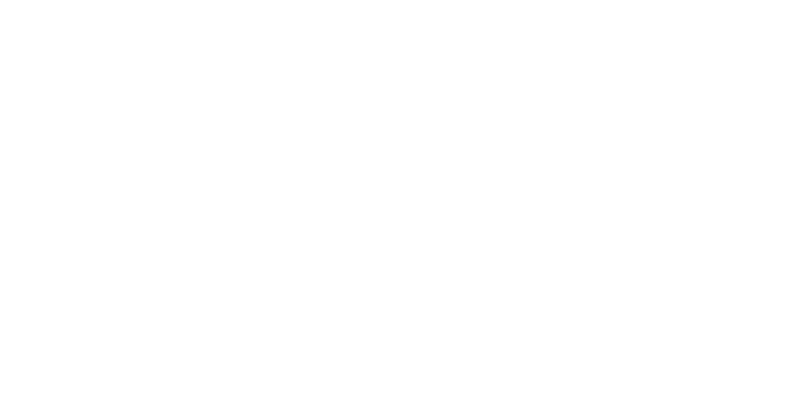 After years of neglect by politicians, action on energy poverty and Europe’s inefficient buildings looks set to take its rightful place at the centre of the EU’s Green Deal agenda – with a new ‘Renovation Wave’. Friends of the Earth Europe has been the leading voice in Brussels for stronger action to tackle both energy waste and energy poverty together.

Eradicating the scourge of energy poverty has taken on new urgency as levels are suspected to be soaring during Covid-19 lockdowns. But the pandemic has opened-up the opportunity of directing green recovery funds to renovate Europe’s inefficient buildings – promising a ‘win-win-win’ for the climate, poverty action, and sustainable jobs. We will be mobilising to ensure the promises bear fruit.

To bolster the effort, an increasingly energised and broad alliance of grassroots groups, academics, NGOs and interest groups is rallying to the cause. 600 of them came together, despite the pandemic, in a massive Right To Energy forum, to strengthen advocacy, and share best practice examples for tackling energy poverty. 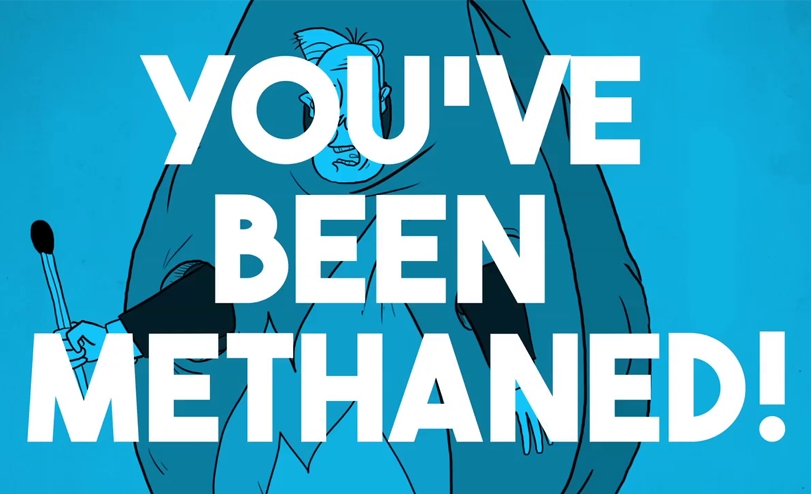 2020 saw the rise of a bubble of questionable promises around the latest climate technofix – hydrogen. In Brussels and across European capitals, hydrogen became the talk of the town – and it quickly became clear the gas industry lay behind this hype.

The European Commission rushed out a new strategy promising massive support for hydrogen. With increasing enquiries from journalists, we got to work sharpening our analysis. Our media work, opinion pieces, comical videos and advocacy exposed the fossil fuel interests that lay behind the overblown promises, the impacts on the climate, and the high costs. In a few short months, energy ministers expressed more hesitation around the benefits of hydrogen. Much is still do be done to replace hype with realism and prevent crucial funds for the energy transition being wasted on false solutions like fossil- based hydrogen.

A still from our video about how the fossil industry fakes a green and caring image. © FoE Europe. 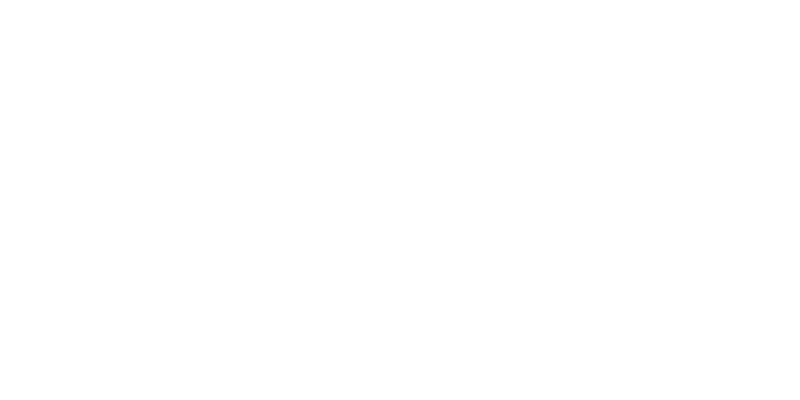 We continued exposing the cosy relationship between fossil fuel company lobbyists and politicians. We helped to coordinate a growing coalition of groups calling for Fossil Free Politics around Europe. Social media actions targeted media events discussing climate policies that were sponsored by Shell and other fossil fuel companies. Our reports exposed the influence of the gas industry on EU energy infrastructure decisions; and exposed the concerted lobbying effort by the fossil fuel industry during Covid-19 to win concessions for energy projects and gain access to bailout funds. 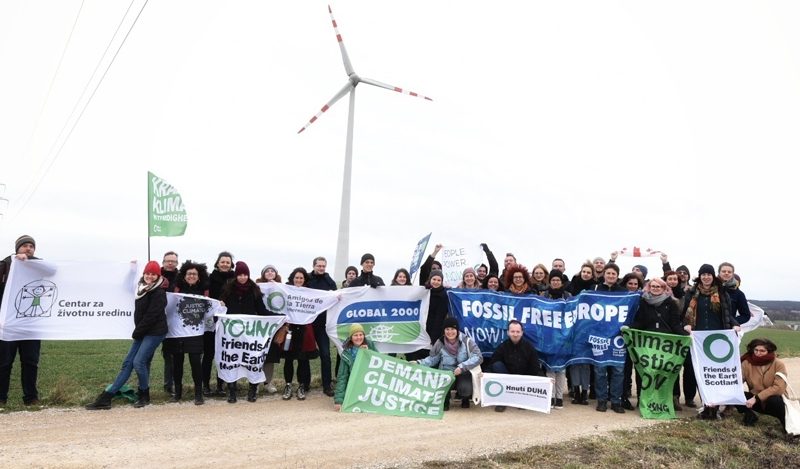 A web of acronyms and obscure political processes helps corporate interests in Brussels hide their greedy methods. It’s the job of Friends of the Earth to puncture that web and shine a light. And in 2020, that’s just what we did for the little-known Energy Charter Treaty.

It started as an unknown issue. The trade agreement is being used by polluting energy companies to block action on the climate crisis. But by exposing scandals, we helped put the Energy Charter Treaty at the centre of controversy. Scandals like the coal company suing the Netherlands for over a billion euros for phasing out dirty coal power; or the gas company suing Slovenia for demanding an environmental impact assessment for fracking.

It’s now widely accepted that the Energy Charter Treaty is not compatible with the Paris Agreement. Now the campaign is in full swing to end it.

Climate campaigners from all over Europe met in Austria at at the start of the year before the pandemic. © FoE Europe. 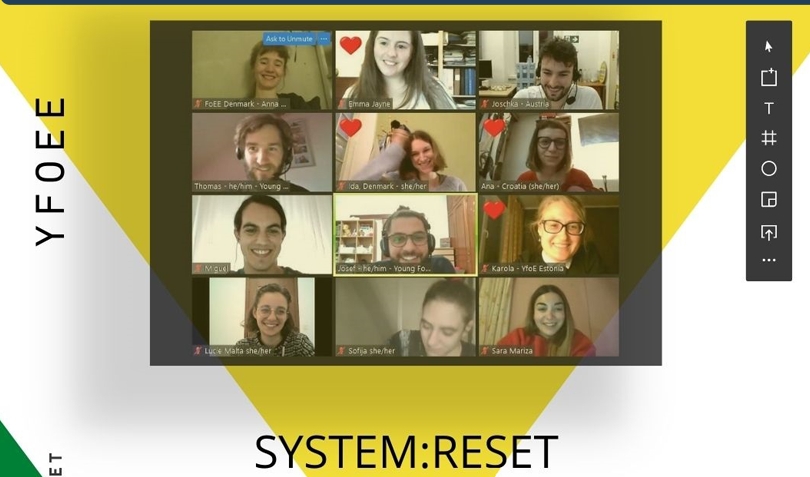 We brought activism online, with over 300 people registered for our first-ever online youth gathering.

Over the course of ten days, we ran 30 workshops and sessions on topics ranging from eco-feminism and the European Green Deal, to climate migration, the commons, and sustainable activism. Recognising that we’re all sick and tired of Zoom calls, we experimented with different formats, including ‘TV shows’, yoga, a cinema session, speeches, and skill-shares.

The gathering was organised as part of our System:Reset project, which aims to reach young people who are under-represented in European policy-making and gather their visions for how to build a Green Deal which guarantees a sustainable and just future.

Part of the meetings, trainings and workshops that Young FoEE organised online for our SYSTEM:RESET project. © Young FoEE.

Young Friends of the Earth at the Mock COP 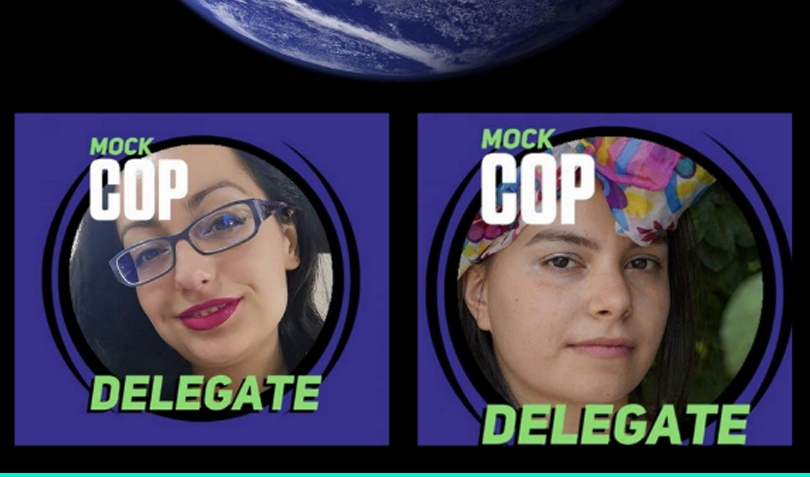 Two volunteers from Mladi Za Zemiata/Young Friends of the Earth Bulgaria were the Bulgarian national delegates at Mock COP26 – a global, youth-run virtual climate conference organised in place of the postponed COP26 in Glasgow.

330 delegates from around the world gathered for two weeks at the end of November to agree joint policy demands for a justice-led approach to the climate crisis. Together with a legal team, and prioritising voices from countries most affected by climate breakdown, the delegates drew up a treaty which they are urging governments to commit to ahead of the rescheduled COP26 in 2021.